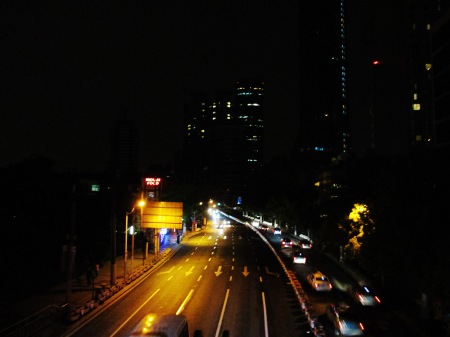 Architecturally speaking, sites of government and worship are often placed on higher elevations (atop hills) because of our societal connotations of height with power and oversight. This picture looks south from the pedestrian overpass that crosses Yan’an Road, which is a major road that runs east-west through basically all of Shanghai. I love walking on it because, a) it’s the easiest way to cross into Xuhui, b) it offers a nice view, c) I love when cities consider pedestrian circulation, and d) it’s a weird power trip to walk over the cars below. Especially when the weather’s nice and the lights aren’t murked out by hazy skies.

Shanghai at night is quite peaceful, because unlike cities like New York, Shanghai closes pretty early with most restaurants closing around 9 and the subway done by 11ish. The main exceptions would be the Bund area and the former French Concession. For all intents and purposes, Yan’an Road can be considered the dividing line between the more business and residential Jing’an to the north and expat- and restaurant-heavy Xuhui to the south (part of Jing’an is south of Yan’an … but whatever). This follows the historical lines between the International Settlement of which Jing’an is a part and the French Concession, now part of Xuhui. I’m completely oversimplifying this, but let’s just say that I’ve crossed this overpass many times and often at night – either on my way to dinner or on my way back.

One thought on “night lights from the overpass”