This is probably old news to most Americans, but I’ve been in China for the last two years so I’m not very accustomed to the new banknotes. And seriously? The new 100-dollar bill is weird. I mean … the COLORS! The blue! The orange! They’re supposed to be green. That’s what makes American money so special and wonderfully confusing to foreigners: they’re all the same size and all the same color – green. 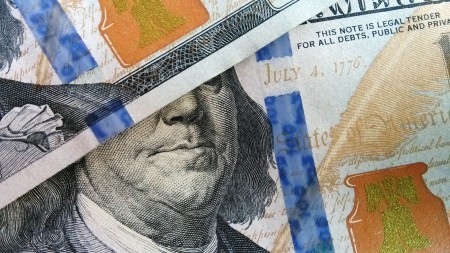 Can you still call them greenbacks or lettuce if they’re now multi-colored? Well I guess we call them ‘dead presidents’ even though Alexander Hamilton and Benjamin Franklin weren’t presidents, so like practically everything else with the English language … why not? I know the craziness is due to anti-counterfeit measures, but it’s still weird to see something so established change. THEY SHOULD BE GREEN! Sigh.

After calming down from the shock of color (id est, colors other than green), I noticed that the two c-notes were stamped on the back with a blue mark in Arabic. A US note from a Chinese bank with an Arabic stamp? Huh?

After a bit of online Googling, I found out that it’s called a ‘chop mark’ and is still fairly common for currency circulating abroad, especially in the Middle East and Asia. Basically it’s a little stamp that someone (a private person or money trader, not the government) uses to indicate authenticity so they don’t have to constantly re-check if it’s real or not. Interesting, eh? In all my life in the States I’d never seen one, but then again, I never did handle many 100-dollar notes.

So I guess at some point these two Benjamins made their way through the Middle East. Ah, the curious travels of US cash.