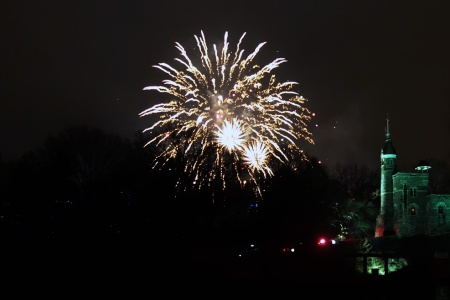 This was the first year that I rang in the new year in New York. I live about 15 minutes away from Times Square, which means that for New Year’s Eve celebrations, I got AS FAR AWAY from home as possible. Okay, that’s not entirely accurate. I stayed in Manhattan, because late night subway traffic, especially right after the New Year, is ridiculous. But I definitely escaped to the Upper West Side. Only tourists are in Times Square on New Year’s Eve, and they clutter up the place. Roadblocks everywhere, traffic diverted, heavy police presence, and no access to certain subway stations. Total madness. Starting at 2 PM, you had to go through police checkpoints to get east of Eighth Avenue. STARTING AT 2 IN THE AFTERNOON. That meant no access to the NQRW trains for me and long lines of people on the sidewalks. ARGH.

But Upper West Side? Nice dinner, hung out at a friend’s place, then headed over to Central Park and watched fireworks. Yay. Nice and simple. And so far? 2017’s not been too horrible. There’s nothing to be happy about, but at least the world hasn’t exploded or imploded yet, so that’s good, right? The key to happiness is low expectations.