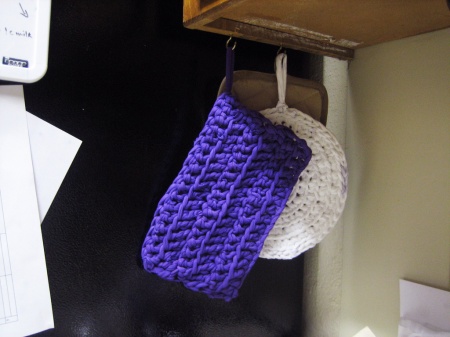 Ain’t they purty? Hey now, remember I’m new to this crocheting thing. Anyway, as a college student, I get a lot of t-shirts and the thing is … I’m not a big fan of wearing t-shirts. So, I found this website about crocheting with t-shirts and I thought I’d give it a try. But I didn’t have nearly enough for a rug, nor do I have need for a rug, so I decided to make hot plates (trivets) instead. 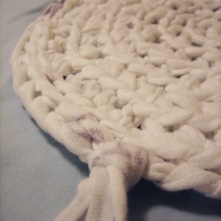 This one was made using the white material that was in a pouch I had made earlier. Using my 10 millimeter crochet hook, I sort of followed these directions to crochet a circle, but I apparently am no good at counting, so it’s a little wonky. If you’re wondering, those bits of purple in the white were from the image on the t-shirt. I found another t-shirt and decided to try making a simple rectangular one. But unfortunately that t-shirt was smaller so there was less fabric to work with, and thus it’s kind of small. I also had to add extra fabric in order to complete the row (I was double-stitching), so there are some not-so-pretty moments. Actually, there were quite a few wonky moments.It’s actually a really pretty purple that matches the bits of purple in the white one. I think it looks blue in the first picture because of the fluorescent lights in our kitchen.

Now if only I can scavenge up more t-shirts, I can have a whole collection of different shapes! Wouldn’t that be neat? My new roommate will probably think I’m crazy … but whatever, I’m a college student who can be found embroidering or crocheting at 4 AM. I think I’m already crazy.

I’m teaching myself to crochet. Yay! Well, it’s slow progress but I think I’m starting to get the hang of it. Today I went out and bought two crochet hooks, one small 3 mm and a larger 10 mm. I bought the larger one because there are some specific projects that I have in mind which would require such a hook, but since I’m not sure when/if these projects will come about, I’d better not mention them yet.

Thank goodness for the internet. I got hung up on some really confusing online how-to guides, but the website NexStitch has easy-to-follow video tutorials. So I got the single and double crochets down pretty well, I just need practice keeping the stitches even. I’m also trying to crochet a circle (flat) but it keeps curling up even though I’m doubling the number of stitches … frustrating. I kept practicing with stitches and unraveling it to start over since I don’t have much yarn, and by golly, my hand hurts.