It’s been a while since I’ve posted, so I’m going to start up again with a fun one.

Is it really necessary to have a tutorial for Frito pies? Most would say no, unless you’re not from Texas, at which point, yes, you do need a tutorial. In New York, people look at you with eyebrows raised and an expression somewhere between disgust, horror, and confusion if you mention a Frito pie. They usually have the same expression after I explain what a Frito pie is. But they’re really yummy! It’s a staple dish!

So here we go. There are three main ingredients: Frito chips, chili (preferably with no beans … but whatever floats your boat), and shredded cheese (I usually go with plain ol’ cheddar).

1. Get yourself a bowl. Really any bowl will do as long as it’s big enough for all the yummy goodness that is to come.

2. Open the bag of Fritos. Pour some of those corn chips into bowl. Oh, and as a side note: If you’re in Texas, enjoy the low price and ease of obtaining Fritos, because there’s only one grocery store in my area that carries them and a bag cost me $3.50! 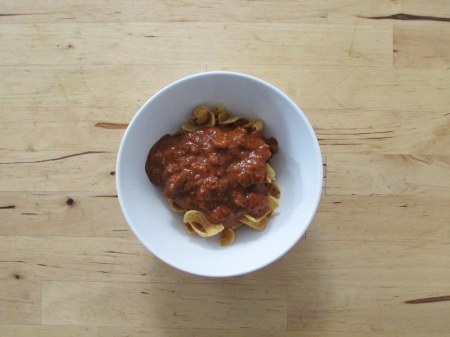 3. Open the can of chili, heat it up on the stove, and pour some of it over the Fritos. Well, I suppose you should have had the chili on the stove before you even got out the bowl … but stop criticizing me! I usually go with Hormel’s no beans chili because (being from Texas) beans do not belong in chili and there’s no Wolf brand chili up here and I’ve never been good at making my own chili.

4. Open the bag of shredded cheese. Grab a handful of it and sprinkle it oh so gingerly over the chili-covered Fritos.

5. Get yourself a fork. Plunge that fork into the concoction, stir it up a bit, and use that fork to stuff your face with Frito pie.

It’s not really healthy, and I make no recommendations in regards to feeding it regularly to children. Everything in moderation. I merely say that it’s yummy, it’s easy, and it’s cheap (except in certain states like New York where cans of chili and bags of Fritos and bowls, shredded cheese, forks, and life cost more than they should). It’s one of those foods that just makes you happy. Maybe it’s because I grew up eating Frito pies so it’s kind of a nostalgic thing, but anyway, I really like ’em.

The end! I hope you’ve been enlightened.