I just wanted to extend a hearty congratulations to all those graduating over at Pratt! Pratt was my first real taste of New York, so even though I haven’t been back to Clinton Hill since that summer way back when, I will forever have a soft spot for Pratt. 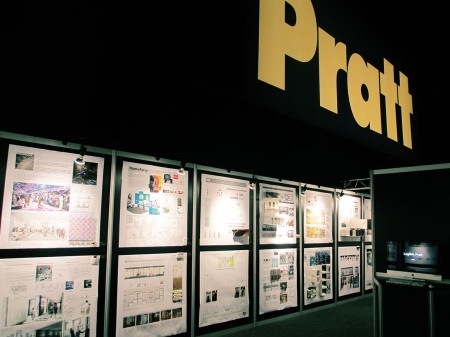 Two of my fellow interns are graduating from Pratt’s interior design program, so I stopped by the Pratt Show on Monday to check out their work. They graduate next week, but basically they’re done. This show is the big hurrah with all their thesis projects, and their thesis books are due aftergraduation … crazy, eh?

The Pratt Show 2013 is currently being held at the Manhattan Center (311 West 34th Street at 8th Avenue). The show opened May 6 (when I stopped by) and it’ll run until Thursday, May 9. It’s open to the public! You should go! And if you do, head to the very back where the master’s interior design work is exhibited!

I used to work every Tuesday, Wednesday, and Thursday … but it’s Tuesday and I ain’t at work! I worked at the Contemporary Arts Museum of Houston (CAMH) in its curatorial department, and it was an amazing experience. Last Thursday was my last day, so I’m going to toot my own horn a bit … because I can! I was an amazing intern. Truly, I was.

[NOTE: This image is a scan and not mine. Purposefully low quality.]

One of the other interns recently created a Tumblr page for the museum and one of the posts featured my work on Issuu! Not my work as in work I created, but my work as in the results of over two months of work I did scanning, cropping, optimizing, and uploading a whole bunch of old exhibition catalogs! Yeah, that was validating. I think I was a tad overqualified for the position. I also scanned a whole bunch of old photos which will be uploaded to the website by whatever intern replaces me. Ah, I’ll miss the scanner. I spent a good amount of time with that thing.

If you’re in Houston, go visit the Contemporary Arts Museum (always free!). The current exhibit is trippy. Then grab some lunch at the food truck in the parking lot of the Museum of Fine Arts. My favorites are Phamily Bites (the Vietnamese eggrolls or pork sandwich) on Tuesdays and Creole2Geaux (catfish po boy) on Wednesdays. Yum. And yes, there are a lot of links in this post. Au revoir, CAMH!

No more long commutes. No more rush hour. No more stop-and-go traffic. No more crazy highway drivers. No more having to cross multiple lanes in a short amount of time to make the exit. No more passing a rotating cast of homeless guys who stand on that one corner (seriously, do they have a schedule?). And finally, no more work. Woot!

Okay, I actually quite liked work. Even though a lot of the archiving and digitizing work was fairly tedious grunt work, I found it quite relaxing and interesting, because it meant I got to sort through a lot of their old exhibitions and learn about the museum’s history. But the getting to work and getting home from work were exceedingly annoying and I am most glad to be rid of those aspects. 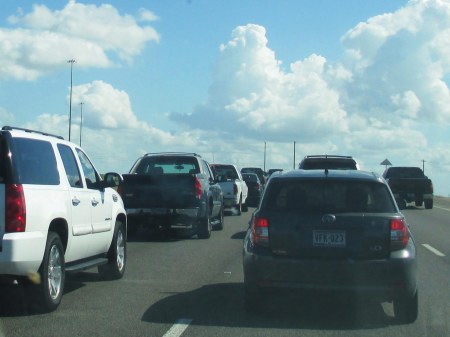 At work, I’m organizing files to be archived. In the file cabinets there were some magazines, but only certain articles were relevant for the archives, meaning … I had to cut up an Artforum. ACK! 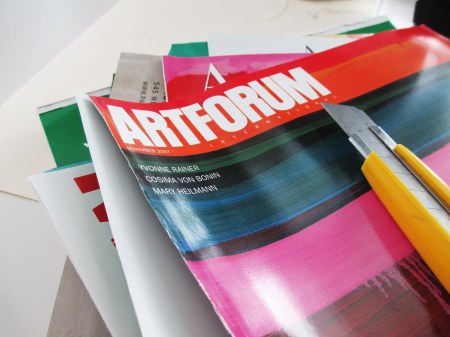 I am one of those people who does not write in books. I don’t highlight. I don’t even fold pages. I just do not mess with publications. It seems so blasphemous. And then to CUT UP a magazine, especially one like Artforum? Sadness. Pure sadness in my mind. Especially because according to the archiving procedures, I had to cut out the relevant articles AND the cover … and the rest of the mutilated glossy could go into recycling.

Sigh. I have a stack of Better Homes and Gardens and I don’t even tear those apart. I might place a post-it note on an article to get back to, but I don’t think I could bring myself to destroy it. Oy. Yes, I’m a bit neurotic about these things, but it truly pained me to cut up those magazines!

I have never been one for real work. Working around 30 hours a week at an architecture firm (as a part-time position that was only supposed to be 20 hours a week, I might add) just about killed me. I worked there about four months before throwing in the towel. I used to think that I hated it because the pay was so crappy, but it’s more a question of value. Right now I have an internship that’s unpaid. But I like it. Getting paid would be nice, but I’m okay with this slave labor.

Sure, it could be that I like it because it’s only about 20 hours a week (and I don’t have school or other work commitments like I did while at the architecture firm) or it could be that it’s because everyone speaks English at my internship and I’m not such an outsider. It also could be that my current work actually seems useful and helpful whereas my work at the architecture firm seemed largely about getting the clients to pay us. But mostly I think it’s because at my internship, no one’s an architect. Yep, I gotta say that’s it.

There’s a reason why a lot of people (id est, architecture students) refer to ‘architecture’ as ‘architorture’. And scarily enough, it’s said with almost a sad fondness, because really … all architects are masochists to some degree. I guess that’s why it’s refreshing to go to work at the internship, rifle through boxes of old exhibition installation photos, take a trip to the archives, compile a list of publications, watch a YouTube clip of an interesting piece of performance art, and actually eat lunch in the break room instead of my desk. Almost doesn’t feel like work.

I like architects. Most of my friends are architects, studied architecture, or are in some way connected with architecture. And I can’t really fault architects for their neurotic quirks, obsession with details, egosim, or constant dissatisfaction … because I’m often guilty of the same. I’m still an architect at heart and still relate best to other architects, but that doesn’t necessarily make it easy to work with them. The art world, however, IS A LOT MORE CHILL. Sure they have their own brand of crazy, but (from what I can tell) it’s a lot less ulcer-prone.

I’ve been in Texas for a month now, and it’s … fine. It’s not bad, just a bit annoying and different. Anyhow, I had dinner with an old friend from college, which was nice. And the internship is going well, which is nice. And, well … that’s about it. I feel like I’m just wasting away and biding time until I get to move back to New York. Everything’s just a bit uncertain this summer, and I don’t feel the same kind of pressure here, which means I don’t have much motivation to do anything. Not a good attitude. Sigh. Gotta fix that.

Today was my first day of “work.” That word is in quotations because I feel like hell and I’m not even getting paid for it. Oy, how do people manage to work full-time? There should be a nap break in the afternoon … I want a siesta. I was on the computer all day, researching precedents for a design competition I’m supposed to help this guy work on. Utter tedium. Thankfully, the University of Texas library system still allows me access to all its wonderful sources. Yay. Unfortunately, it’s ridiculously hard to find information on the mass of chaos that is the internet. The project is for a high school in Henan province, but it’s ridiculously big (estimated around 100,000 square meters), with dormitories, classrooms, 10 basketball courts, et cetera. Anyone know of any projects that I could use as precedents? It’s not just architecture, there’s some urban planning and landscape elements to it too … which I’m not familiar with. Any help would be appreciated. Ugh … so tired.