Downtown Suzhou is a historic area under cultural protection. Therefore there must be rainbow-colored lights and ridiculous lit-up sculptures! Oh of course. Welcome to China!

In all seriousness though, Suzhou’s a lovely town with that crazy Chinese mix of really old and insanely new, and even though it’s quite close to Shanghai, it’s oh so much more peaceful. Old Suzhou has some pretty canals, bridges, and traditional architecture, but it also has that fake touristy sheen that most historic places in China have. It seems kind of unavoidable unfortunately. It’s a nice place to take a stroll though … if you don’t mind the crowds, if you don’t mind the same ol’ trinkets being hawked in every other shop, and if you don’t mind that you feel very little sense of actual history. 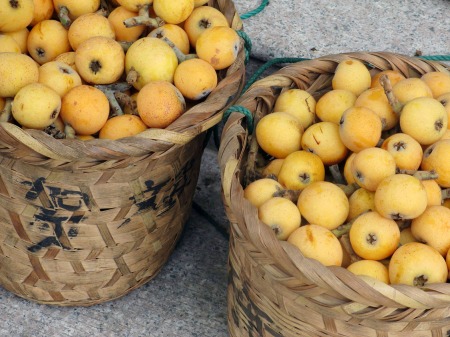 I never knew what a loquat was until two weeks ago. Shocking, isn’t it? I think I might’ve heard of loquats before, but … that’s about it. When I took a daytrip to Suzhou a few weeks back with friends (because Suzhou’s only a half-hour train trip from Shanghai), I kept hearing references to 枇杷 (pípa). Er … what’s that? Oh, it’s a loquat. Er … what’s that? My friend’s father was driving us around Suzhou, so he pulled over to the side of the road and bought some. And then it was the group of us standing awkwardly on the side of the road holding these round yellowish-orange things like complete idiots. Uh, sir? How do you eat these?

May Day and Cinco de Mayo have come and gone. April showers are over and the May flowers are in bloom. And the month of May is going to be crazy as heck.

It’s been a while since I last posted, and all for good reason. I did some traveling with my class, then we had midterms, I got sick, family came, work was annoying, et cetera. The next few weeks are going to be very busy as well, but all’s still well. The below picture is from a temple in Wuxi, China. The city of Wuxi didn’t really have much to offer, but it was nice to get away from the city for a bit.

On Saturday, I went with some classmates and some locals (a classmate’s friend and his friends) to the city of Taicang.  Taicang is located about an hour away from Shanghai, but it was so quiet in comparison to Shanghai, with blue skies and lots of space. Spent about the entire day in the town. We went to the park and museum, which were largely centered around Zheng He, a famous Chinese explorer and diplomat. Then there was a place called Shaxi Town, which is part of the old town that had been preserved.

One of the locals said that most of the buildings around Taicang (which looked like any normal city) were probably five years old, ten at the most. Crazy to think about how much a town can change in such a short period of time. We walked around the city center a bit and we probably could have been anywhere. They had a KFC … ugh, that chain is everywhere.

Anyway, had a great time. They treated us to lunch and dinner, both of which were AMAZING. Lots of seafood (for lunch we had three different kinds of shrimp) since Taicang is located on the Yangtze River and is a natural port. Oh and we also ate roasted pigeon … yum. It was like roasted duck, but smaller. In Chinese it’s pronounced ge1 zi. We had a ball of a time saying it. Much fun. Not exactly a tourist city, but nice for a low-key getaway from Shanghai. 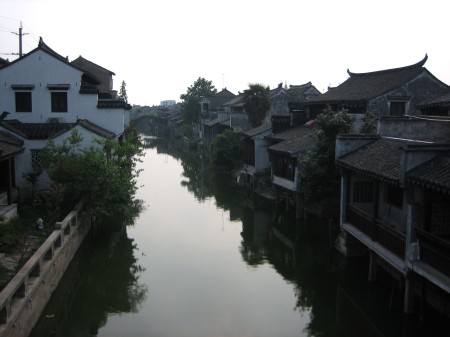