A while back I had remarked about the weird flavors of potato chips on offer in Shanghai. Well, I thought I’d take things a step further. So here’s my review of Wasabi Shrimp and Spicy Green Peppercorn Fish. Ah Lay’s, I know you’re trying to cater to the very-lucrative Asian market, but … slow your roll. 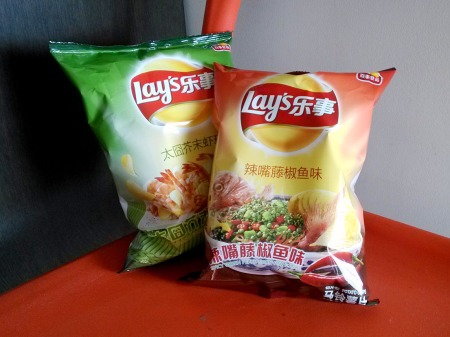 First of all, I have to admit that I’ve never liked wasabi. The worst thing that could happen to me when eating sushi would be that the fish or roll would run into that glob of green nastiness. So in a way that potato chip flavor was successful, because the wasabi taste was definitely present – but I had to chuck the bag because I couldn’t get beyond three chips. I could taste a hint of the shrimp, but it was pretty much all wasabi to me. Spicy Green Peppercorn Fish, on the other hand, I finished. It was reminiscent of the dish – all pepper and not fishy – but not too spicy or numbing, so my palate could cope. It wasn’t particularly great and definitely won’t make my list of favorites or go-tos, but it was interesting in an entirely tolerable sort of way.

Verdict: Avoid Wasabi Shrimp (unless you happen to really like wasabi) but give Spicy Green Peppercorn Fish a try … it’s definitely Chinese-y.